Four months ago I posted my first blog ever. Here it is.

I wanted to record my actions, following my decision to do more on climate change. I guess in a way, by documenting what I did, I was challenging myself to stick with this. 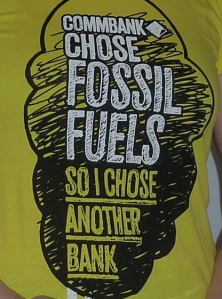 In the intervening months I’ve closed almost all my accounts with the Commonwealth Bank – tomorrow, on Global Divestment Day I’ll close the remaining two accounts. As part of this process I’ve exchanged letters, phone calls and emails with the Bank, explaining my decision to divest.

I’ve also been writing to GESB, my superannuation fund, asking for information about its fossil fuel investments. This is a work in progress…

I’ve also been part of an enthusiastic group of people who want to really raise the profile of climate change action in Fremantle. Last week, we launched 350 Fremantle. Over 100 people turned up and the majority committed themselves to get active. The enthusiasm to work together to take effective action was inspiring.

On Saturday 14 February, I’ll be going to the Global Divestment Day activities in Subiaco and joining with people all over the world to send a powerful message that investment in fossil fuels has to stop.

The launch of 350 Fremantle on Tuesday night was a huge success.

People clearly weren’t just there out of interest – the majority of people attending signed up on the night to hear more from 350.org and get actively involved. This demonstrates that Fremantle people are ready to get stuck into some really effective action on climate change. 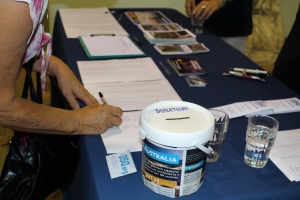 We are meeting again on 24 February to plan what comes next. All welcome! 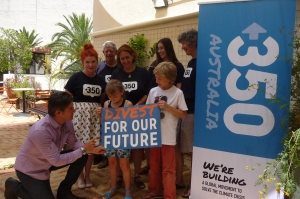 350 Fremantle supporters and the Mayor of Fremantle Brad Pettitt join forces to promote the launch of 350 in Fremantle.

The Mayor will officially launch 350 Fremantle, followed by a screening of Bill McKibben’s (350.org founder) film Do the Math. The film outlines the rising global movement to fight the fossil fuel industry through divestment.

The film will be followed by a discussion on how each of us can be involved in effective climate change action.

For information about the launch, and to reserve free tickets click here

At a 350 Fremantle meeting a couple of weeks ago, one of our members Tom, offered to write an article about divestment for the Fremantle Herald – a local weekly paper.

Today, the article was published – Great work Tom! The article explains of how we, as individuals and as members of institutions, can take effective action on climate change, by change to a bank that does not invest in fossil fuels. Read Tom’s article here

350 Fremantle is up and running, and you can be part of the action.

A great team of Fremantle people are working together to spread the word about how we can all take meaningful action on climate change. It is so energising to be part of this group, where people take on board something they can do, and get stuck in and do it – whether that be writing articles, designing posters, finding venues, organisaing stalls. The level of activity has been astounding!

We are launching 350 Fremantle with a screening of the Bill McKibben film Do the Math – a documentary about the movement to address the climate crisis and challenge the fossil fuel industry.

Come along and hear how you can be part of this international movement to tackle climate change.

I learnt yesterday that public submissions on the proposed dredging of Abbot Point close at 5:00pm today. I didn’t have a chance to put in a submission yesterday, but today, I’ve written a very quick submission – material courtesy The Guardian.

I didn’t have time to read the 2,730 report on the Queensland government Website http://www.dsdip.qld.gov.au/infrastructure-planning/abbot-point-strategy-preliminary-documentation.html. (only 10 days were given to read the material and provide a submission – what is the hurry?)

And whilst it is an impossibly short deadline, if you have a minute, submissions can be sent to wetlands@dsdip.qld.gov.au I also cc the Federal Minister Greg.Hunt.MP@environment.gov.au

Here’s what I said:

The Great Barrier Reef is an iconic Australian natural treasure that must be protected for current and future generations. It does not belong solely to the population of Queensland, but to all Australians, and in fact to the citizens of the world – now and in the future.

According to Professor Marcus Sheaves, head of marine biology at James Cook University, the surrounding wetlands are crucial to the health of the Great Barrier Reef as they prevented certain sediments and pollutants from flowing onto the coral.

As well as the direct impact on the reef, the wetland must be protected in their own right.

I understand the dumped sediment would directly wipe out 114.3 hectares of foraging habitat for birds, with a further 16.4 hectares lost due to increased activity and noise. More than 97 hectares of potential seagrass habitat, vital for animals such as turtles and dugongs, will suffer “permanent and irreversible loss” due to the dredging.

The documentation regarding the proposal states the dumping will have “significant residual impacts” on the Australian painted snipe, which is nationally listed as endangered.

More than 15 species of migratory shorebirds use the wetland, including the red-necked stint and the sharp-tailed sandpiper, which are both endangered. Vine thickets, a type of endangered vegetation, is also found on the wetlands.

Wetlands also act as nursery grounds for juvenile fish and prawns. The Caley valley wetlands can host up to 40,000 water birds from 52 species at peak times.

This is utterly unacceptable and must not be allowed to proceed. 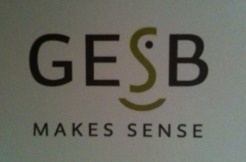 Yesterday, I received a response from GESB to my letter (See Posts on 7 November and 11 October for background).

This time, GESB did respond to most of my questions. GESB confirmed it has 5.9% of its total equity portfolio allocated to companies in coal and consumable fuels, integrated oil and gas, and oil and gas exploration.

The letter also informed me that 17 of GESBs investment managers who are signaturies to the United Nations Principles for responsibile Investment (UNPRI) have all confirmed they will adhere to the UNPRI standards. A quick look at the UNPRI website shows that climate change is clearly on the agenda:

“In an era where our changing climate has become one of the greatest threats to both society as a whole, business and the long-term profitability and sustainability of companies and markets, the Principles for Responsible Investment (PRI) Initiative is supporting signatories to take action on climate risk.”

Judging by the statement in the letter that “GESB’s key investment objective is to produce sound returns on members superannuation…” I suspect GESB doesn’t see switching investement from fossil fuels to renewables as being a top priority.

I wonder if GESB could be encouraged to set up a Fossil Free Fund… Makes sense to me.

One of the challenges for me, is working out where I can most effectively use my time, in trying to bring about action on climate change. Where will I get the best bang for my buck? I suspect, working with others in Fremantle to build 350 Fremantle might be a better way to go. Or maybe, it makes sense to keep plugging away on lots of fronts.

Ten people, many of whom hadn’t met each other before, met in a quiet room at Rosie O’Grady’s in Fremantle and enthusiastically committed to working together to build a strong united voice in Fremantle for effective action on climate change.

All of us have a shared concern about climate change, some of us have been actively campaigning for some time now, but most importantly, all of us can see the potential for the Fremantle community to come together to send a powerful message to government and corporate Australia that urgent action is required.

The international scientific community has recognised that ‘business as usual’ use of fossil fuels will increase the likelihood of severe, pervasive and irreversible impacts for people and ecosystems. In that room on Tuesday, we all agreed that many, many Fremantle people want to do something about climate change and will come out in force to tell the simple story that Australia must join the international movement to transition out of fossil fuels and into renewable energy.

What is really amazing is, at this busy time of the year, everyone was keen to meet again in two weeks to plan how we can make climate change action a huge focus for Fremantle people in 2015.

You are welcome to join us:

I was invited to help out with the 350.org stall at the Jacaranda Festival in the riverside suburb of Applecross on the weekend. I imagined spending the afternoon under a shady Jacaranda tree, but other than that I had no idea what the afternoon would hold or the sort of response we’d get from the general public. The Jacarandas, usually awash with purple, were somewhat muted this year, but the crowd was out in force. Sadly, my hopes of being shaded by a beautiful tree were dashed when I spotted the 350.org stall sandwiched between the stage, with the PA system blaring, and the merry-go-round wafting diesel fumes in our direction – and not a tree to be seen. However, as the 350.org budget is non-existent, and the Festival organisers hadn’t charged any fee for the stall, we made the best of it. It was hot in the November sun, the vast majority of people walked past us without giving second glance and a couple of people vigorously argued the validity of the climate science. More than a few were interested in what 350.org is doing to combat climate change, many people took leaflets about divesting and quite a few signed up as volunteers. The local member of State Parliament met a 350.org volunteer who is a constituent and was challenged to consider the climate impacts of legislation before Parliament.

We gave potted Chocolate Mint, complete with a list of useful websites, to people who were interested. A great idea – thanks to Paula! Between the heat, the sun and the diesel fumes it wasn’t the pleasant afternoon I’d envisaged. The disinterest from the crowd reminded me of the emphatic observation from Geoffrey Sachs, Instructor in the Climate Change Science and Negotiation Course, “This is NOT going to be easy”. I’ve been inspired by the wonderful, dedicated 350.org volunteers I’ve met over the past two months, and buoyed by all the positive news about divestment that comes across my Twitter feed. Yesterday, we got some great free publicity for 350.org and many potential new people taking action on climate change. However, the Jacaranda Festival reminded me there is still a huge amount of work to be done!

The news today of the groundbreaking climate deal between the US and China puts the fossil fuel industry on notice. It puts the Australian Government on notice too.

350.org is about to get active in Fremantle and there has never been a more important time to campaign for action in the lead up to the United Nations Climate Change Conference in Paris in 2015.

350.org Fremantle had its first outing at the Fremante Festival Parade last Sunday. It was a great success with lots of positive feedback from the crowd.

The next step is to get together and talk about how we can promote 350.org and a fossil free future, in and around Fremantle.

This will be an informal gathering to meet each other, share ideas and start the ball rolling for a more active 350.org presence in Fremantle.

Come along and join in this exciting and important movement for a sustainable future.